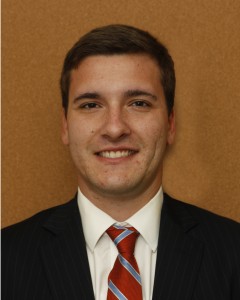 Who here on campus would have thought that Matthew Dybus, entering St. Thomas Aquinas College as a freshman in 2011 would eventually be a successful Development Officer for the only remaining diocesan seminary in the United States? Everyone that knew him!

Matt will tell you that it was his involvement on campus that lead him to where he is today.  Matt began as a freshman at STAC studying Finance with a minor in Economics. As a student Matt brought the values that were instilled in him on the home front:  respect and a strong work ethic.

Matt immediately became involved in Student activities on campus: as a STAC Ambassador (his campus tours were amazing), a Career Ambassador (helping students prepare for the real world) and as the President of the Outdoor and Adventure Clubs. To this day, Matt is always up for an “adventure.”

Immediately upon graduation Matt was offered a position at Cathedral Prep High School. It didn’t take long for them to realize what Mathew brings to the table. A scholarship recipient himself, Matt can appreciate what it takes to secure funding for students to achieve their own aspirations and Matt officially took the position as Associate Development Officer.

Matt’s responsibilities include creating relationships between benefactors and Cathedral Prep High School, resulting in: tuition assistance for students, event planning, which includes an annual golf outing, a Hall of Fame event and a Craft Beer fundraiser (again – bringing his experiences from STAC to his advantage), and enrollment/recruitment.  He is successfully juggling all of this because Matt, you see, is a Cathedral Prep High School Alum himself.

His Alma mater remains proud of the work he is doing to support Catholic young men who prepare for possible priestly lives, and for his ongoing support to the College as well. He totally gets it!

Forever a Spartan!  Hats off to you Mathew Dybus!